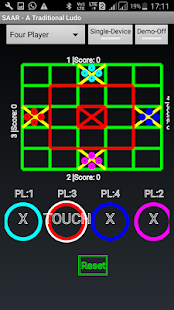 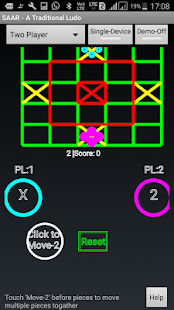 An attempt to revive forgotten traditional ludo game that was played by all age group people before arrival of smart phones and computers era.

Traditionally, the game was played on floor with a dice and 4 pieces of each player. one player throws dice and move his piece(s) to move toward inner house and hits other players' pieces to prevent them reaching target house. The player who reaches target house first is winner.

The same game can be now played on mobile with the app running on one or more android devices. the dice is replaced with a random number generator touch event based soft dice.

Pieces can be moved by touching them.

The app can connect to the app running on another device over Bluetooth session to enable players use their own devices to generate numbers and move pieces.

Two persons can play from anywhere within Bluetooth range.

The game is somewhat similar to 'Chosar' or 'Chopat'